In this guide to the Buick lineup, you’ll learn more about the brand and its award-winning models.  Used Buick cars for sale can save quite a bit over their new counterparts. Best of all, the new owner reaps all of the benefits of a well-liked and well-appointed vehicle.

Since depreciation has slowed, a Buick crossover used may be a better deal for those who will sell their vehicle again in a few years. The vehicle’s high quality, however, may encourage more buyers to take their Buick as far it will go.  JD Power ranks the brand high in reliability, indicating a long road life ahead.

If you are looking for the right used Buick SUV for sale, you’ll find the compact Encore, midsized Enclave and super-sized Envision.  Buick used cars may include the handsome Verano, open air Cascada, classic Lesabre, or multi-talented Regal. 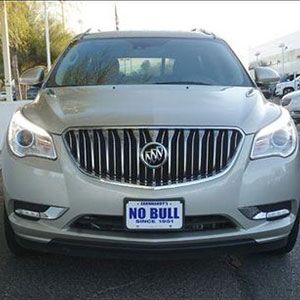 A used Buick LaCrosse has the class and clout to take a place in the executive parking lot.  This sedan was given a long wheel base, allowing it to replace the Park Avenue and the Lucerne, which is still available as used car. Like every vehicle by this brand, a cocoon-like feeling in the cabin is created by the elimination of noise, vibration and harshness (NVH).  Recent editions have a 310-horsepower V6 engine. Stop/start reduces fuel waste at redlights.  An eight-speed automatic transmission makes it nicer to drive and reduces fuel waste when the car is on the go.  For the money, preowned model shoppers will appreciate the handsome exterior, beautiful interior, overall value and spaciousness.

If you don’t want the flagship, a midsize Regal is the answer.  Regals were retired in 2004 and brought back as a new car in 2011.  These were updated in 2014 with more style and Intellilink connectivity.  An 8-inch touchscreen tops a revised center stack.  Drivers will find that the 259-horsepower turbo is fun to drive.  Safety systems expanded to include radar- and camera-based avoidance devices.  Each year since has seen the addition of more technologies and luxuries.  Another sedan, the used Buick Verano, was only recently retired and is considered a good value for the money.

In 2015 alone, 1 out of 3 Buicks sold were Enclaves. This makes it possible to find good used Buick Enclaves today.  The family driver commands a 288-horsepower V6.  Brand engineers have employed extensive NVH measures to make sure that this big vehicle blocks the road’s drone and keeps the kids in the backseat from feeling every bump.  Luxury shoppers will appreciate how upscale the interior is and how many conveniences are included. 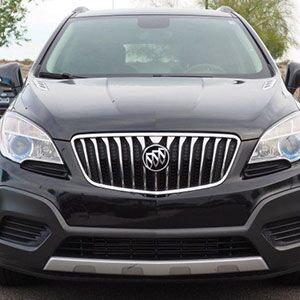 A Used Buick Encore Plays to the Crowd

Encores are the number one Buick today.  Outselling expectations, the crossover is loved by critics and shoppers. Motor Trend calls it a cute ute.  Journalists have noted that this model helped turn around Buick’s old image, capturing the imaginations of younger shoppers.  Sure it’s practical and affordable, but it is seriously stylish and sporty.  All of the new technologies are on the menu, and a used Encore shopper may find a lot for their used car dollar.

A Used Buick Envision is a Good Middle Child

Envisions are slotted in the middle.  If you need a classy SUV, but the Encore is too small and the Envision is too big, well, the Envision is just right.  Intellilink provides entertainment technologies.  Advanced safety features add peace of mind.

The brand has won lots of awards which demonstrate its luxury, durability and reliability.   Kelley Blue Book, a leading car appraisal firm, declared Buick to be the Best Value Luxury Brand in 2016, 2017 and 2018.  For shoppers, that’s a good reason to put these cars and SUVs at the top of the list.

Furthermore, Buick won back-to-back JD Power Awards in 2016 and 2017.  It took home both the Highest in Sales Satisfaction honor and the Highest in Customer Satisfaction Among Mass Market Brands honor. In early 2018, JD Power announced that Buick had earned the first annual J.D. Power Total Ownership Experience Award. In addition, the 2018 Envision was rated highest for quality.  The 2017 Encore was declared a top SUV for quality as well. The 2015 Enclave is considered among the Most Dependable Family SUVs. LaCrosse sedans earned Most Dependable Large Car in the 2015 JD Power Awards.  AutoTrader declared the new 2018 Regal TourX one of its Must Drive vehicles.

In 2014 and 2015, Kelley Blue Book gave the Verano, Encore and Enclave 5-Year Cost to Own Awards.  This winning streak has continued.  For instance, the Encore earned this award again in 2018.  Keeping costs down is the Buick way, and that means a better ownership experience for used car buyers.

A Closer Look Helps Narrow Down the Options

With a large online inventory, Earnhardt offers a selection of used Buick SUVs and sedans.  Shopping fun continues with a test drive of your favorites.
Adjust Payment Terms ×