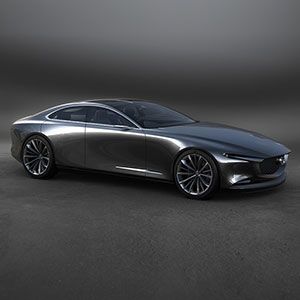 When you want a good car, it is only natural to think of Mazda.  Their reputation for quality and technology as new cars makes them good deals as used cars. Like Hondas or Toyotas, used Mazdas can be counted on for long road lives.  This durability keeps preowned Mazdas in high demand.  Phoenix Mazda used cars for sale are offered in large numbers at Earnhardt Auto Centers, a group of 23 dealers.

If you are looking for a used Mazda Phoenix, you can choose from a variety of hatchbacks, sedans and SUVs.  The cars go by either 3 or 6.  SUVs are labeled CX and are numbered 3, 6 or 9.  This may help you as you imagine how big the vehicle is that you are considering.

A Used Mazda3 Brings a Good Reputation to Your Driveway

The Mazda3 was named to the 10Best List by Car and Driver for four years in a row!     Year after year, the budget-minded small car has earned a spot on Kelley Blue Book’s 10 Coolest Cars list.  For two years in a row, the Mazda3 took home a Best New Car Award from Good Housekeeping. This hatchback clearly makes an impact on critics.  Used Mazda3 Shoppers appreciate its economical pricing. Used car buyers can feel assured that these sedans and hatchbacks will earn their keep.

A Used Mazda6 Looks Good and Drives Like a Dream

Mazda is known for making cars more drivable.  The Mazda6 definitely handles better than many sedan rivals. Interiors are well-appointed and well made.  There’s a high tech atmosphere to the whole package.  A big backseat makes this a favorite of families.  Used car shoppers will be pleased with the technologies under the hood and on the dash.  The previous generation began in 2014.  It added a larger infotainment screen and standard Bluetooth in 2016.  In 2017, a standard rearview camera was paired with a MazdaConnect entertainment system.  On the menu, automated crash avoidance systems were added, enhancing the sedan’s reputation for standard safety.  The 2018 model year began a new generation with even more modern features.

CX 3 is a Quick and Efficient Compact Crossover

Many commuters want something quick and efficient for their drive.  A used Mazda CX 3 is a perfect companion in Phoenix traffic. Fuel efficiency keeps costs down.  Dash tech connectivity provides entertainment.  Versatility allows this small SUV to help when you are moving boxes and other large items.

CX 5 Is Proud to be in the Middle

Who says that being in the middle isn’t a good spot?  A used Mazda CX 5 Phoenix slots between the CX-3 and CX-9, but it has carved out its space just fine.  Seating five, the CX-5 has a generous back row and cargo hold.  Car and Driver gave it an Editor’s Choice Award.  The critics like its efficiency, value, high-quality design, and luxurious features. Owners will appreciate the available Active Driving Display and BOSE 10-speaker music system. Smart City Brake Support was available on many used Mazdas.  By 2018, it was becoming a standard.  This system watches for dangers and can slow or stop the car to prevent a fender bender.

A big family needs a spacious SUV with all of the comforts that can be included.  That’s what you get with a used Mazda CX 9 Phoenix AZ.   Like the CX 5, the CX 9 has earned top awards from Car and Driver.  Families will like the flexible interior.  Center seats can be tipped forward without removing a carseat. This allows for easier entry and exit for kids on the back row. Safety is assured by new features such as a lane keeper and a blind spot monitor. 2018 editions are IIHS Top Safety Picks. 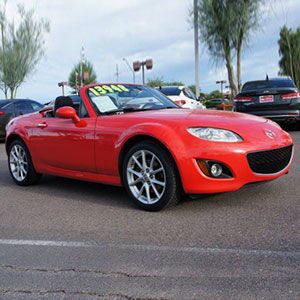 How can you not love the sporty, speedy Miata?  This affordable sports car earned 2016 World Car of the Year.  Motor Trend calls Miatas ‘hilariously fun’. That’s something that a test drive of a used Mazda Miata can easily prove.  The car is built lighter to do more with every horse under the hood.  Few roadsters offer so much at this level of affordability.

Does a Preowned Mazda Belong in Your Garage?

A good reputation, good safety records, good fuel economy, and good quality are four reasons that a Mazda should be on your shopping list.  Its durablity and technology will also help it earn your used car dollar.  You can shop online and then see these cars in person at one of Earnhardt’s 23 dealerships. It’s important to get behind the wheel and take the car or SUV for a test drive.