He was the man whom millions know to be the great founder of Earnhardt Auto Centers and also the man who never left a doubt that he was anything but a quality, conservative, salt-of-the-earth, true southwestern Cowboy.
He epitomized pride in the great State of Arizona. 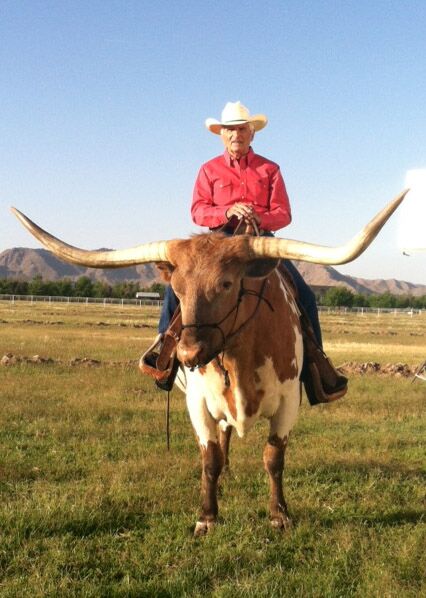 Tex Earnhardt is an American success story. He was born on December 9th, 1930 and grew up in Texas, near the Rio Grande River Valley. By the time he was a teenager, he’d moved to Arizona with his family and had become a rodeo cowboy while he had also begun working at the family’s gas station located in the heart of “old town” Chandler, AZ (at the time, a sparsely populated community mainly built around the farming and ranching business). Seeing an opportunity to sell the very cars and trucks that he filled and serviced, Tex Earnhardt became the youngest person to ever receive a Ford Franchise - just before his 21st birthday. Earnhardt Ford (the first of many Earnhardt Auto Centers) was founded on September 4th, 1951.

Tex, known for his love of ranching, cowboy ways and farming was made famous when shortly after founding the company, he rode a steer into a parade noting, “this ain’t no bull” (a literal truth because he was atop a steer); and the phrase later became part of the famous tag-line still used today by Earnhardt Auto Centers. Selling one vehicle at a time, Tex built his car-business by hand with hard work, integrity, dedication and sweat equity; the cowboy way.

“Our companies, today, are based on the values that Tex instilled in all of us,” said son Hal Earnhardt III.  “Respect others, be helpful, work hard and never quit… these are all things we learned from my dad that guide us at both Earnhardt Auto Centers and Earnhardt Ranches. So, the mission to serve our surrounding communities will continue to grow and expand; ensuring the legacy and spirit of Tex Earnhardt is felt and present for many, many years to come.”

This commemorative shirt is the collaboration of two, great local companies; one older and one newer. Earnhardt Auto Centers and State Forty Eight – both who have come together to create this shirt, to remember Tex and to help keep some of that “Arizona Cowboy Spirit” alive in all of us.  Rest in peace, Tex Earnhardt. A true, local, Arizona Cowboy. An Arizona Legend.

By providing your contact information to ANY form contained in – or connected to – this website, you are hereby agreeing to receive follow-up communications and responses from our teams which may include text messages from Earnhardt Auto Centers and our affiliates or partners at the number(s) and/or information which you have provided. You are also expressly consenting to recurring contact from the aforementioned company or its business partners at the number you provided regarding products or services via live, automated or prerecorded telephone call, text message or email. You understand that your telephone provider may impose charges on you for these contacts, and you are not required to enter into this agreement/consent as a condition of purchasing property, goods, or services. You also understand that you may revoke this consent at any time by notifying the dealership, Earnhardt Auto Centers.